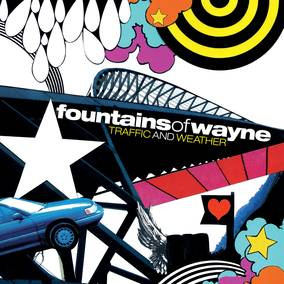 Not since Ray Davies has a songwriter been able to craft such sharply observed vignettes in the space of a three-minute pop song like the late Adam Schlesinger. And on 2007’s Traffic and Weather, Fountains of Wayne’s fourth album, Schlesinger took his art to a new level, singing short stories as varied as crushing on a DMV clerk ("Yolanda Hayes"), celebrating the sexiness of a car not generally considered sporting ("92 Subaru"), being broke ("Strapped for Cash") and having luggage lost by an airline ("Michael and Heather at the Baggage Claim"). And while it lacks a radio-friendly hit like “Stacy’s Mom”—it should be mentioned that Chris Collingwood only contributed three songs to this record—there are still earworms aplenty, particularly on “I-95,” Collingwood’s “Seatbacks and Traytables,” and the title tune. Finally out on vinyl, this Real Gone release comes with a printed inner sleeve featuring lyrics and in a gold with black swirl pressing limited to 5000 copies worldwide, exclusively for RSD Black Friday!

Side B:
1. Michael and Heather at the Baggage Claim
2. Strapped for Cash
3. I-95
4. The Hotel Majestic
5. Planet of Weed
6. New Routine
7. Seatbacks and Traytables