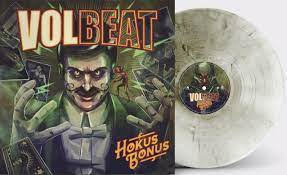 VOLBEAT has announced its ""Hokus Bonus", a vinyl-only compilation of "bonus tracks" from special and international editions of the band's previous albums. Limited to 3,000 copies, the LP features brand new cover art from long-time VOLBEAT illustrator Karsten Sand and will be pressed on "Magician's Smoke" colored vinyl.

"Hokus Bonus" brings several songs such as "Slaytan", "Under The Influence" and "Immortal But Destructable" to the vinyl format for the first time ever, and includes early versions of fan favorites "Evelyn", "Black Rose" and "Die To Live".