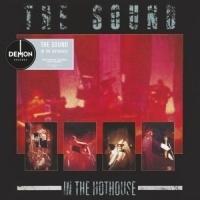 Whilst the Sound may never have matched the commercial success of their peers, the group are frequently hailed as one of the greatest bands of the 1980 s and have a cult following to this day. Recorded at the Marquee Club across two August nights in 1985 In The Hothouse is the only live album released whilst the band were still active The set draws on highlights from the group’s back catalogue as well as material from Heads And Hearts which had been released a few months earlier. Pressed on two 140 g clear vinyl and housed in a deluxe replica gatefold sleeve and printed inner sleeves.