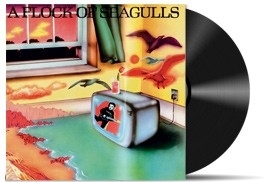 A Flock of Seagulls first gained attention in the dance clubs with “Telecommunication,” which is included on this debut release. The band were played heavily on MTV, quickly becoming known for their outrageous fashion and
lead singer Mike Score’s crazy haircut… (well, it was the 80s… and 2 of the members were hairdressers!)
Their self-titled debut consists of hyperactive melodies, synthesizer noodlings, and electronic drumming.
Legendary producer Phil Spector referred to this particular album as “phenomenal.” Music On Vinyl presents you this quintessential collection of new wave ear candy!