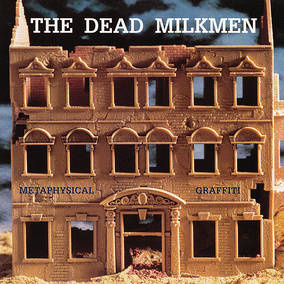 "Parody is in safe hands with the Dead Milkmen."
-The Los Angeles Times, Metaphysical Graffiti review, 1990

The Giving Groove is proud to present the first vinyl reissue of The Dead Milkmen’s classic album Metaphysical Graffiti, now remastered with bonus material. Fans have cherished hits such as "If You Love Somebody, Set Them on Fire" and "Methodist Coloring Book," but since the Enigma label’s initial release in 1990, copies of the original pressing have become increasingly difficult to unearth. The remastered album will be offered as a limited-edition variant, pressed exclusively for Record Store Day Black Friday 2022. Housed in a gatefold jacket, bonus materials will include:
• A reproduction of the Methodist Coloring Book. Penned by Dean Clean’s wife, Melissa, the coloring book was printed as a promotional item for the 1990 release and has never been made commercially available.
• Four of the album’s songs, which the band loving refers to as “The Earls,” have been pulled from the 12” and given their own 7” vinyl (pressed on snot-colored brown and green variants) with new artwork.
• An interior jacket designed with never-before-seen photos, text about the model house that is featured on the front cover, and Dandrew’s recounting: "Everything I Needed to Know About Culture I Learned from Metaphysical Graffiti”.
• The 12” sleeve featuring the original art, lyrics, and credits.
• A QR code to download the remastered album digitally as a compliment to the vinyl.

As with all Giving Groove releases 100% of the label’s profit benefits a music-related charity. The Dead Milkmen have chosen to support Rock to the Future, a 501(c)3 organization that equips Philadelphia youth with life skills to support current and lifelong wellbeing through free, student-driven music programs.

12":
•Beige Sunshine
•Do The Brown Nose
•Methodist Coloring Book
•Part 3
•I Tripped Over The Ottoman
•The Big Sleazy
•If You Love Somebody, Set Them On Fire
•Dollar Signs In Her Eyes
•In Praise Of Sha Na Na
•Epic Tales Of Adventure
•I Hate You, I Love You
•Now Everybody's Me
•Little Man In My Head
•Anderson, Walkman, Buttholes And How!