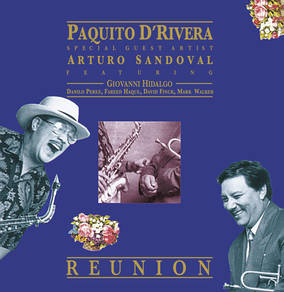 "Reunion was the first time that Paquito D'Rivera and trumpeter Arturo Sandoval recorded together since D'Rivera's defection in 1980; Sandoval had recently left Cuba himself. The co-leaders are joined by a superb band: pianist Danilo Perez, acoustic guitarist Fareed Haque, bassist David Finck, drummer Mark Walker, and Giovanni Hidalgo on conga. The group mostly performs originals plus a couple Chucho Valdes songs, "Body and Soul" (a showcase for Sandoval) and Dizzy Gillespie's "Tanga." Plenty of fireworks occur on this consistently heated Afro-Cuban jazz set and the co-leaders clearly inspire each other. When will they have their next reunion?" -Scott Yanow, AllMusic