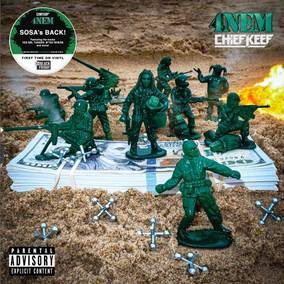 Cultural icon and Chicago rap legend Chief Keef, has continuously kept his status as one of the true noisemakers in the Hip-Hip world. 4NEM, his first solo album in over three years, cements that status as it was released to both critical and commercial acclaim. Although it’s been out for a few short months, it is already widely considered to be one of the best releases of the year and of Chief Keef’s career. This is the first time it will be available on vinyl.

Bitch Where
Tuxedo (feat. Tadoe)
See Through
Say I Ain’t Pick Yo Weak Ass Up (feat. Ballout)
Like It’s Yo Job
Ice Cream Man
Wazzup
The Talk
Shady
Yes Sir
I Don’t Think They Love Me
Hurry B4 The Gate Close
Hadouken
On What
Picking Big Sean Up-Bonus Track