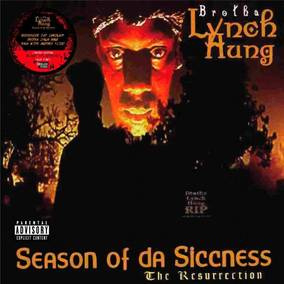 While his debut felt like the work a lone visionary, Season of Da Siccness heralds a movement. Lynch is backed by several of his Sacramento cronies, and his burgeoning posse was rewarded when the album reached #13 on Billboard’s Heatseekers chart. Whereas 24 Deep relied heavily on vintage samples, Season of Da Siccness focuses on a self-made vision of funk. “Sicc-Made,” “Rest in P**s” and “Liquor Sicc” embody a slow-moving concoction of hissing synths, groaning bass, and shards of piano. The sound design is a total representation of Lynch’s themes: nausea, psychosis, and claustrophobia. In turn, the imagery has become even more grotesque. Though Lynch’s songs grow out of everyday tales of ghetto living, his narratives are infested with disturbing, almost surrealistic imagery: baby spines, floating entrails, and caskets full of purple marijuana smoke. Lynch’s art is so image-oriented that he functions more like a painter than a songwriter. The highlight might be “Welcome 2 Your Own Death,” which creeps along on top of a growling subterranean bass tone worthy of John Carpenter.