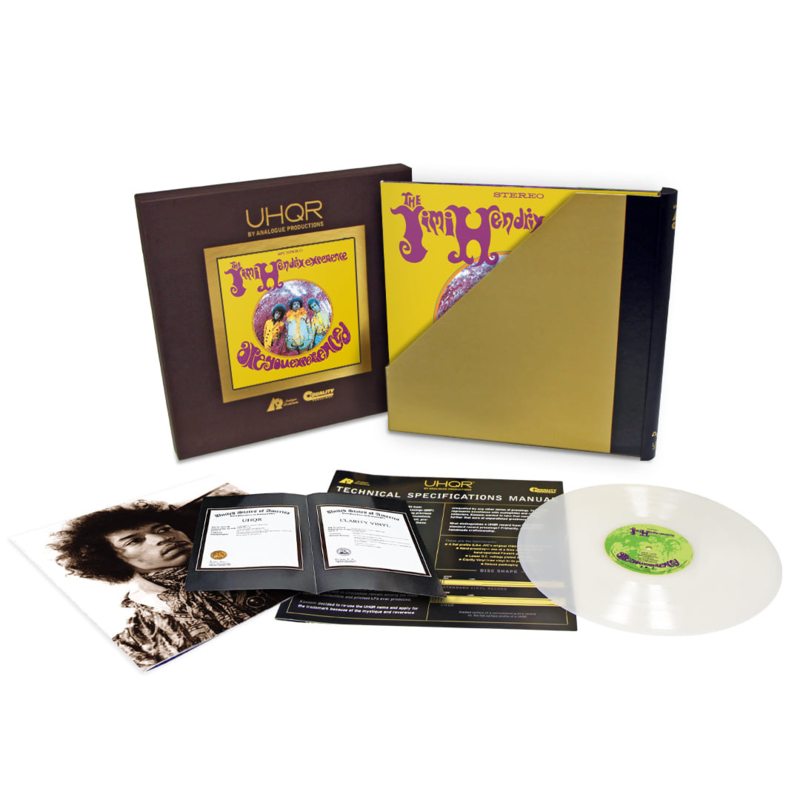 Are You Experienced, debut release by The Jimi Hendrix Experience returns!

Purest possible pressing and most visually stunning presentation and packaging!

Regarded as the greatest, most influential debut release from any artist!

This stereo UHQR reissue will be limited to 20,000 copies, with gold foil individually numbered jackets.

When it was first released in 1967, Are You Experienced turned the music world upside down, as Hendrix showed everyone exactly what it meant to be "experienced." Hendrix synthesized various elements of the cutting edge of 1967 rock into music that sounded both futuristic and rooted in the best traditions of rock, blues, pop, and soul. It was his mind-boggling guitar work, of course, that got most of the ink, charting new sonic territories in feedback, distortion, and sheer volume. It wouldn't have meant much, however, without his excellent material, whether psychedelic frenzy ("Foxey Lady," "Manic Depression," "Purple Haze"), instrumental freak-out jams ("Third Stone from the Sun"), blues ("Hey Joe"), or tender, poetic compositions ("The Wind Cries Mary") that demonstrated the breadth of his songwriting talents. Not to be underestimated were the contributions of drummer Mitch Mitchell and bassist Noel Redding, who gave the music a rhythmic pulse that fused parts of rock and improvised jazz.

Jimi's thoughts on the recasting of his debut album in the U.S. by Reprise Records, who added "The Wind Cries Mary," "Purple Haze" and "Hey Joe" to the original 11-track list, aren't entirely known. But Jimi did vocalize his frustration during later stage performances that "Red House," his superb original blues composition, had been pulled from the U.S. album.

This UHQR is remastered by the legendary Bernie Grundman from the original analog master tapes. Each UHQR will be pressed at Acoustic Sounds' industry-leading pressing plant Quality Record Pressings (QRP) using hand-selected Clarity Vinyl® with attention paid to every single detail. These records will feature the same flat profile that helped to make the original UHQR so desirable. From the lead-in groove to the run-out groove, there is no pitch to the profile, allowing the customer's stylus to play truly perpendicular to the grooves from edge to center. Clarity Vinyl allows for the purest possible pressing and the most visually stunning presentation. Every UHQR will be hand inspected upon pressing completion, and only the truly flawless will be allowed to go to market. Each UHQR will be packaged in a deluxe box and will include a booklet detailing the entire process of making a UHQR along with a hand-signed certificate of inspection. This will be a truly deluxe, collectible product.

As we set out to make the world's best vinyl record, we began by establishing a set of exacting standards to address all of the components that comprise an LP. We call our records made under these strict standards Ultra High Quality Records (UHQR). Most audiophiles would understand that the list of critical components in UHQR includes recording, mastering, plating, pressing and quality control. But some may stop short of considering the raw material used to make the record: the vinyl itself.

We did some research and learned some interesting things about the history of the iconic black vinyl record. The most compelling revelation to us was the fact that LP vinyl is not black in its pure state. The off-white color of the record you are about to listen to is the color of raw vinyl in its purest form (un-tinted vinyl). The black color you're used to seeing is a colorant called "carbon black" that was part of the original compound formulation used in old shellac records. As vinyl compound replaced shellac-based compound, carbon black continued to be used as a colorant. We've expected our records to be black ever since.

To make the ultimate record, we decided to enhance sound quality by removing anything we believed could detract from it. Record styli vibrate (or jitter) on a microscopic level, and any particles of carbon black pigment that happen to be on the surface of the groove could introduce surface noise. By not adding carbon black to our Clarity Vinyl, we eliminate the possibility of noise contamination due to carbon black particles. Instead, your stylus is allowed to effortlessly slide down a glossy and silky smooth groove wall.

When we purchased Classic Records, the brand name Clarity Vinyl® came with it. We're proud to have resurrected, refined and trademarked Clarity Vinyl, the perfect canvas for our masterpiece: vinyl in its purest form.