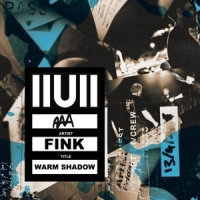 20 aug 2021Fink announces “IIUII” (It Isn’t Until It Is) - an album, a 58 date European tour - and a single previewing the album: Warm Shadow (IIUII) Warm Shadow (IIUII) reimagines one of Fink’s best loved songs. An intimate plea urgently delivered with driving guitar and voice, building irresistibly with keyboard and percussion. IIUII is essentially a re-imagining, a reminiscence and a unique take on the"best of" format, with the band rerecording key Fink tracks from 2006-16 - "that whole arc, from my bedroom to having a proper hit, playing the big festival stages with big production, and all the rest." In 2019, after heavy band touring for three years, Fin did a solo acoustic tour which took him full circle back to the simplicity of those early days - and making an album that reflected this seemed a beautiful way to tie the whole story together. IIUII, then, is a retrospective, but it’s just as much about the here and now. To re-record those songs with the maturity that Fin and his band members have achieved is about viewing the past through the lessons it has taught, not just remastering and repeating it. This was a chance to listen back through all the records, appreciate them for what they are, separate from the usual demands of which songs work on stage – and then give each song the treatment it deserves.