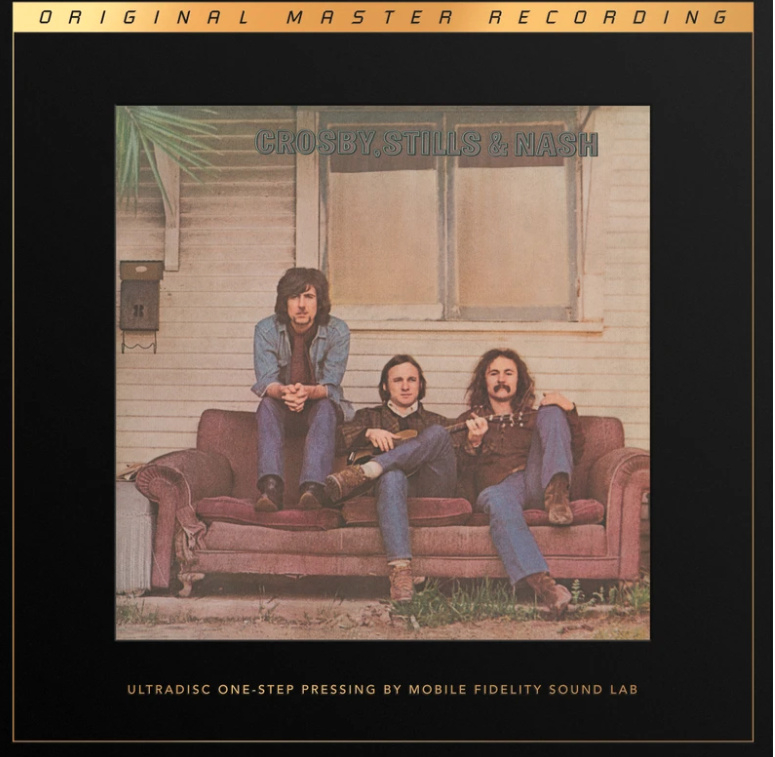 The enduring charm, contemporary relevance, and harmonic convergence of Crosby, Stills & Nash's fabled self-titled debut owe not only to impeccably played songs and resonant lyrics, but to career-defining performances by music's first genuine supergroup. Crosby, Stills & Nash lingers as an example of the whole being greater than the sum of its parts. Factor in phenomenal studio production and acoustic-based architecture that served as guideposts for myriad albums that followed, and popular music would never be the same.

Limited and numbered, pressed on MoFi SuperVinyl at RTI, and mastered from the original master tapes, Mobile Fidelity's UltraDisc One-Step 180g 45RPM 2LP collector's edition enhances the incalculably influential work for the ages to come. Surpassing the sonics of any prior version, it peels away any limitations to provide a transparent, ultra-nuanced presentation of a record that birthed the Laurel Canyon movement and established a precedent for close harmony singing that has never been eclipsed. The organic presentation of the textures; expanse and depth of the soundstages; fullness of tones; natural extension of the acoustic guitar strings; realistic rise and decay of individual notes; seamless blending of the vocals – all those important sonic facets (and more) reach demonstration-grade levels.

The packaging features the same attention to detail. Housed in a deluxe box, the Crosby, Stills & Nash UD1S pressing features special foil-stamped jackets and faithful-to-the-original graphics that illuminate the splendor of the recording and the reissue's premium quality. Aurally and visually, MoFi's UD1S copy exists as a curatorial artifact meant to be preserved, touched, and examined. It is made for discerning listeners that prize sound quality and production, and who desire to fully immerse themselves in the art – and everything involved with the album, from the images to the finishes.

The backstory of how Crosby, Stills & Nash came to be nearly matches the import of its content. Already a renowned multi-instrumental virtuoso, Stephen Stills sought a fresh beginning after Buffalo Springfield splintered. Similarly, vocal powerhouse David Crosby arrived after leaving the Byrds and gaining a reputation for being difficult. Graham Nash drifted over after a frustrating stint in the Hollies. He met his new mates at a party. When the three sang together informally for the first time, their fate was sealed. To further tie their fortunes together, the singers used each of their surnames to identify the group to ensure the collective could not exist or continue on without all three members.

From the opening of the lead track, the multi-part "Suite: Judy Blue Eyes," written for Judy Collins, it's apparent the trio's dynamic cannot be replicated or substituted. Originally released in May 1969 on Atlantic, the eponymous debut cracked the Billboard Top 10 and spent almost two years on the charts. Such longevity can be credited to the distinctive traits each member lends to a record Rolling Stone cites as the 252nd Greatest Album of All Time. Stills trades in folk, country, and rock accents while handing a majority of the instrumental duties (organ, bass, and lead guitar included). Crosby paints with mood and atmosphere, as well as direct political commentary. Nash ties everything together with accessible pop melodies.

More than five decades later, the ensemble's mellifluous singing and homespun arrangements continue to soar. The evidence pervades Crosby, Stills & Nash, whose magnetism reflects in standards such as the breezy "Marrakesh Express," protesting "Long Time Gone," poignant "Helplessly Hoping," and poetic "Wooden Ships." No wonder the trio's chemistry – as well as the distinctive traits of each member's singing, interwoven guitar parts, and contrasting personalities – became a permanent part of an American culture dealing with conflicting themes of peace and war, love and violence, and change and status quo.