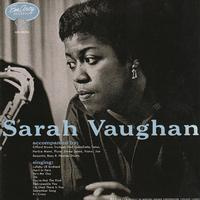 On this 1954 eponymous album, recorded for Emarcy, Sarah Vaughan, arguably in the best voice of her career, sings nine intimate standards. The album was later reissued as Sarah Vaughan with Clifford Brown to signal the involvement of one of the top trumpeters of the day. Brown is on par with her with his bop virtuosity The band, including Herbie Mann on flute, and Paul Quinichette on tenor, have plenty of space for solos.

Utilizing the skills of the top mastering engineers and the unsurpassed production craft of Quality Record Pressings, the Acoustic Sounds series is mastered from the original analog tapes, pressed on 180-gram vinyl and packaged by Stoughton Printing Co. in high-quality gatefold sleeves with tip-on jackets. The releases are supervised by Chad Kassem, CEO of Acoustic Sounds, the world’s largest source for audiophile recordings.