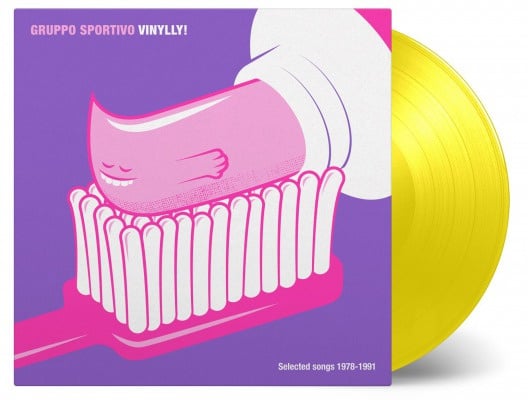 The legendary Dutch band Gruppo Sportivo recorded a bunch of songs which became instant classics. The band broke up in 2013 but reunited in 2018 and been hitting the road again ever since. Vinylly! Is the ultimate collection of songs released by the band, including famous songs like “Beep Beep Love”, “Tokyo (I’m On My Way)” and “Disco Really Made It”. The vinyl-only release consists of 30 songs, starting in the late ‘70s with “I Shot My Manager” and ending in the early ‘90s with “She Was Pretty (Normal Then)”. Frontman Hans Vandenburg has an unmistakable talent for writing sunny songs, as displayed throughout this record. More than just once the songs were centred around a anti-hero. Grab a copy of this exclusive release and enjoy listening to all those classics.
Vinylly! Is available as a limited edition of 500 individually numbered copies on yellow vinyl. The package contains liner notes and various pictures.