Marvin Gaye You're The Man 2LP 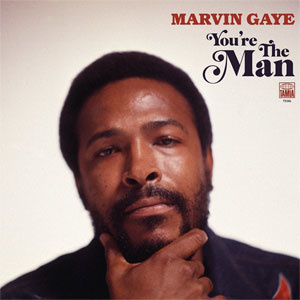 You’re The Man is the first-ever planned “lost” Tamla/Motown album from Marvin
Gaye. Fifteen (15) of the album’s 17 tracks are on vinyl for the first time and three tracks
are newly mixed by SaLaAM ReMi. The album also includes the rare long LP version
of Marvin Gaye’s cancelled Christmas single from ’72, as well as an unreleased vault
mix of its instrumental B-side, and new essay by Marvin’s biographer, David Ritz. The
release will coincide with the 60th anniversary of Motown as a label and also Marvin
Gaye’s 80th Birthday (April 2).
While the tracks have been issued on various collections and deluxe editions, this is the
first time they have been placed in their proper context. In addition to context, You’re The
Man was the album that was proposed to follow-up the monumental What’s Going On, and
it contains all of Marvin’s solo and non-soundtrack recordings from 1972 (his next two
albums in quick succession: Trouble Man and Let’s Get It On).


Selections:
Side A:
Produced by Marvin Gaye (1), Hal Davis (2), Gloria Jones and Pamela Sawyer (3), Freddie Perren and Fonce Mizell (4)
1. You're The Man
2. The World Is Rated X
3. Piece of Clay
4. Where Are We Going?
Side B:
Produced by Willie Hutch
5. I'm Gonna Give You Respect
6. Try It, You'll Like It
7. You Are That Special One
8. We Can Make It Baby
Side C:
Produced by Marvin Gaye except *Freddie Perren and Fonce Mizell
Mixes for tracks 1-3, by SaLaAM ReMi, and track 5, by Art Stewart, are previously unreleased.
1. My Last Chance
2. Symphony
3. I'd Give My Life For You
4. Woman Of The World
5. Christmas In The City
Side D:
Produced by Marvin Gaye
6. You're The Man
7. I Want To Come Home For Christmas
8. I'm Going Home
9. Checking Out (Double Clutch)