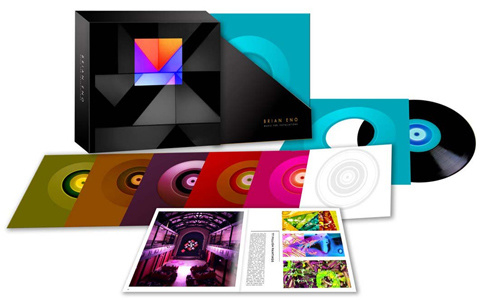 Lightness – Music For The Marble Palace (previously only available as a limited-run CD, via Enostore only):
1. Atmospheric Lightness
2. Chamber Lightness (Premiered at the Eno installation 'Lightness in the Marble Palace' at The State Russian Museum in St Petersburg, Russia, 1997)

I Dormienti / Kite Stories (previously only available as separate limited run CDs, via Enostore only):
1. I Dormienti (Premiered at an eponymous installation by the Italian sculptor Mimmo Paladino at The Undercroft of The Roundhouse in London, 1999)
2. Kites I
3. Kites II
4. Kites III (Premiered at an installation by Brian Eno at the Kiasma Museum of Contemporary Art in Helsinki, Finland, 1999)

Making Space (limited-run CD previously only available at Eno installations and on the Lumen website):
1. Needle Click
2. Light Legs
3. Flora and Fauna / Gleise 581d
4. New Moons
5. Vanadium
6. All The Stars Were Out
7. Hopeful Timean Intersect
8. World Without Wind
9. Delightful Universe (seen from above) (Compiled by Eno for sale exclusively at his installations, this was first made available while guest artistic director of the Brighton Festival, 2010)