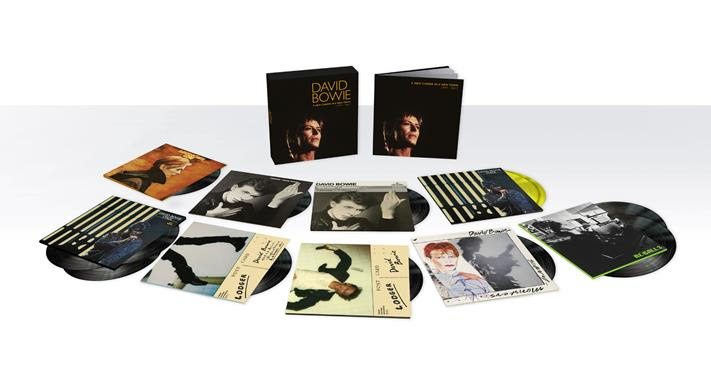 The follow-up to the awarding winning and critically acclaimed DAVID BOWIE ‘FIVE YEARS (1969 – 1973)’ and DAVID BOWIE ‘WHO CAN I BE NOW? (1974 – 1976)’ will be released on 29th September and will contain a brand new remix of the 1979 album ‘LODGER’ by long time Bowie producer/collaborator Tony Visconti.

The 13LP box features all of the material officially released by Bowie between 1977 and 1982.  It includes the so-called ‘Berlin Trilogy’ of albums on which he collaborated with Visconti and Brian Eno as well as the ‘BAAL’ EP, and is closed by ‘SCARY MONSTERS (And Super Creeps)’.

The box set, named after a track from the first of the so-called ‘Berlin Trilogy’ LOW, includes ‘LOW’, ‘”HEROES”’, ‘STAGE (ORIGINAL and 2017 VERSIONS)’ the former in the vinyl box will be pressed on yellow vinyl, replicating its original limited edition U.K. release, and the latter of which featuring two previously unreleased tracks, ‘LODGER’, ‘LODGER (Tony Visconti 2017 Mix)’, ‘SCARY MONSTERS (And Super Creeps)’, ‘RE:CALL 3’ (featuring contemporary single versions, non-album singles, b-sides and songs featured on soundtracks) and the ‘”HEROES”’ E.P., a compilation exclusive to the set celebrating the 40th anniversary of the song, which rounds up the German and French album and single versions of the track in one place for the first time.

Exclusive to each of the box sets is ‘LODGER (Tony Visconti 2017 Mix)’. The remix was started with David's blessing before his passing in January last year. Tony Visconti has revisited the original multi-tracks at Human Studios and remixed the album with the benefit of modern technology to better highlight the album's nuances. Always a personal favourite of David's, this version of the album will also feature newly 'remixed' artwork featuring unseen images from the original cover photographic session from the archive of the Estate of photographer Duffy, working closely with his son Chris.

Also exclusive to each box is Re:Call 3, a new compilation featuring remastered contemporary single versions, non-album singles and b-sides, and songs featured on soundtracks. The cover features a photo by Christian Simonpietri taken at Hansa Studios in Berlin during the “Heroes” sessions in 1977.

The box set’s accompanying 84p book will feature rarely seen and previously unpublished photos by photographers including  Anton Corbijn, Helmut Newton, Andrew Kent, Steve Schapiro, Duffy and many others as well as historical press reviews and technical notes about the albums from producer Tony Visconti.

The vinyl box set has the same content as the CD set and is pressed on audiophile quality 180g vinyl.