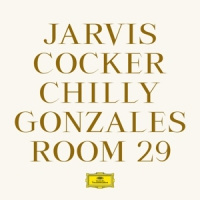 Compelling new Deutsche Grammophon album Room 29, a unique
collaboration between Jarvis Cocker and Chilly Gonzales, asks what the
ghosts of Hollywood’s golden age can tell us about how we came to be
where we are todayStanding at the west end of Hollywood’s Sunset Boulevard, the Chateau Marmont hotel has seen many a famous and infamous guest pass through
its doors since it opened in 1929. A 2012 stay in one of its second-floor rooms
inspired British lyricist and singer Jarvis Cocker to look into its history and
led to this collaborative project with multi-faceted Canadian pianist and
composer Chilly Gonzales. Room 29, a 21st-century song cycle, is set for
release on Deutsche Grammophon on 17 March. Gonzales’ score and Cocker’s
lyrics conjure up the lives of some of Room 29’s previous occupants, as
well as shining a light on the glittering fantasy and often bleak reality of
Hollywood.
“If you must get in trouble, do it at the Chateau Marmont,” noted Harry Cohn,
founder of Columbia Pictures, in 1939. Jarvis Cocker was intrigued by the
hotel’s links to the history of the film industry. He found the key to creativity
in the fact that Room 29 contained a baby-grand piano. What if it could “sing”
of the life stories and events it had witnessed? The idea also ignited Chilly
Gonzales’s imagination, and both artists embarked on a three-year journey
of artistic discovery, unearthing details about guests such as Jean Harlow,
Mark Twain’s daughter Clara, and Los Angeles mobster Meyer Cohen, alias
“Mickey the Haberdasher”. As well as dramatising some of those stories,
their songs capture both the essential loneliness of the hotel room and the
ways in which moving images have “moved” people in ways they don’t quite
understand. Gonzales and Cocker have drawn on the 19th-century model
of the song cycle for a structure capable of containing the broad sweep of
emotions and states of mind elicited by the real and imaginary dramas of
one unusual hotel suite. Room 29 emerges as metaphor for a place within
each of us, home to our deepest desires and fantasies.
Since moving to Germany in the late 1990s, Chilly Gonzales has pursued a
breathtaking range of musical projects, spanning everything from rap and
experimental rock to hip hop and Satie-inspired minimalism. The classically
trained pianist collaborated with the Kaiser Quartett on his last solo album,
Chambers, attracting critical acclaim to its neo-Romantic reflections on
chamber music in the age of pop. The Hamburg-based string quartet plays
a prominent part in Room 29, providing a sonorous tonal complement to
Gonzales’ piano writing and accompanying Jarvis Cocker’s vocals. Lead
singer and primary lyricist of Pulp for over 30 years, on and off, Cocker has
also released two solo albums, and developed a successful broadcasting
career, presenting both Jarvis Cocker’s Sunday Service on BBC Radio 6
Music and BBC Radio 4’s Wireless Nights.
Room 29 was recorded in Paris following its “work-in-progress” premiere at
Hamburg’s Kampnagel in January last year. The finished piece will return to
Kampnagel for three performances (17-19 March) before touring to London’s
Barbican Centre (23-25 March), the Berlin Volksbühne (28-30 March), Paris
(April/July) and selected summer festivals.
TRACKLISTING:
1. Room 29
2. Marmont Overture (Instrumental)
3. Tearjerker
4. Interlude 1 – “Hotel Stationery” (Instrumental)
5. Clara
6. Bombshell
7. Belle Boy
8. Howard Hughes Under The Microscope (Narration by David Thomson)
9. Salomé
10. Interlude 2 – “5 Hours a Day” (Instrumental)
11. Daddy, You’re Not Watching Me
12. The Other Side
13. The Tearjerker Returns (Instrumental)
14. Trick of the Light
15. Room 29 (Reprise)
Epilogue
16. Ice Cream as Main Course