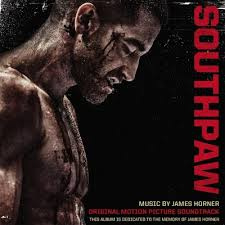 Southpaw: Original Motion Picture Soundtrack is the official soundtrack to the 2015 movie Southpaw. Composer James Horner (Titanic, Braveheart, Aliens, Avatar, Apollo 13, the list goes on…) was tragically killed in a plane crash on June 22, 2015, making this the last film score he composed in his lifetime. This is a great soundtrack to accompany what's sure to become one of the finest boxing films ever.