How To Train A Dragon 2 2LP 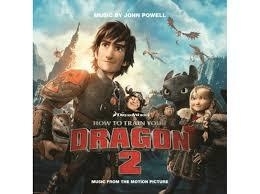 omposer John Powell, who earned his first Academy Award nomination for his music in the original How To Train Your Dragonmovie, returned to score the sequel. The score was conducted by Gavin Greenaway and recorded at Abbey Road Studios in London with a 120 piece orchestra. Sigur Rós lead vocalist, Jónsi, who wrote and performed the song "Sticks & Stones" for the original movie, provided two new original songs for the sequel in collaboration with Powell.