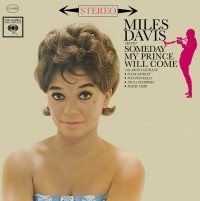 After John Coltrane and Cannonball Adderly left the 'quintet', Miles Davis was forced to search for new qualified musicians. He found them in Hank Mobley, Wynton Kelly, Jimmy Cobb and Paul Chambers.In 1961, just two years after recording Kind Of Blue, Miles and his new line up started recording energetically and finished Someday My Prince Will Come after only three days. This album is a cross-over from Kind Of Blue, which is known for the typical Miles Davis-tunes, to traditional pop-standards such as the eponymous title track from"Snow White And The Seven Dwarfs". Music On Vinyl turned this classic album, including glaring solo's from John Coltrane (joining Miles on two tracks on this album) and Hank Mobley, into a true gem! This record is re-mastered on 180 gram audiophile vinyl.

A1 Someday My Prince Will Come
A2 Old Folks
A3 Pfrancing

B1 Drad-Dog
B2 Teo
B3 I Thought About You